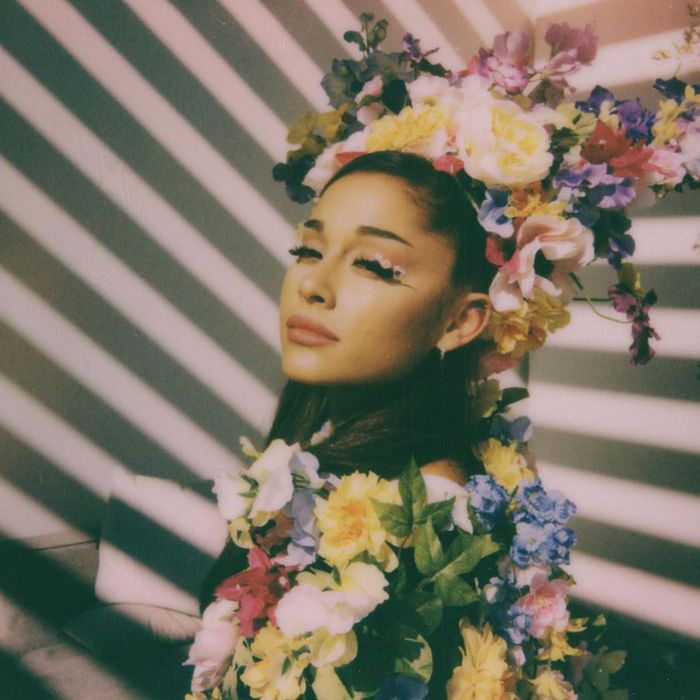 Near the end of Ariana Grande’s extremely absorbing Netflix concert doc, excuse me, i love you, Ariana and her choreographers, Scott and Brian Nicholson, hop on a plane after one of her shows and cheerfully drink brunch alcohol while watching Ari Aster’s Midsommar, the 2019 tale of an orgiastic, murderous Swedish cult. Subtitles inform us that one of Ariana’s “favorite tour pastimes” is “forcing Scott to watch horror movies he will never recover from”; this is made very obvious as Ariana cackles maniacally while watching a terrified Scott try to comprehend the opening scenes of the film, one of the bleakest intros in horror-film history.

The next day, Ariana and Scott watch the movie again as Ariana calmly explains the twisted machinations of the plot. “He knows what the ceremony is because he’s done the research,” she says, referring to William Jackson Harper’s Josh, a grad student visiting said Swedish cult for his thesis. Moments later, she cackles wildly again as the characters onscreen — and an increasingly horrified Scott — watch a pair of old people ritualistically leap to their deaths from the top of a mountain.

I’ve established many times on this website that I find Ariana Grande to be a genius of deranged proportions, one of the weirdest and most depraved minds of our time. It makes perfect sense that she would be a fangirl of one of the other weirdest, most depraved minds of our time, Ari Aster, who makes unimaginably raw and darkly funny films about people dying in the most bizarre ways possible. (Ariana is such a high-key fangirl, in fact, that she went so far as to theme her last birthday Midsommar and purchase Florence Pugh’s actual May Queen dress for the occasion.) What I am here to suggest is that it’s nigh time somebody let these two absolute maniacs collaborate on something.

I don’t care what it is that they collaborate on. I would watch an Ari Aster–directed Ariana Grande music video for “My Hair” wherein Ariana’s giant ponytail becomes sentient and strangles her to death. I would watch Ariana Grande play a heroine in Ari Aster’s next horror film, about a woman whose perfect voice was lent to her by Satan and she must repay him by never wearing pants again ever in her entire life. I would watch a Christmas variety special co-hosted by Ari and Ari wherein both sing “Grandma Got Run Over by a Reindeer” over and over again for four hours straight while staring into each other’s eyes until both begin to lose their minds.

Ariana’s maniacal fandom for Ari isn’t the only thing that leads me to believe they would be a perfect creative match. Anyone who has been paying any attention would recognize that Ariana Grande is the Ari Aster of music, and Ari Aster is the Ariana Grande of horror. The two artists have been grappling with common themes for the duration of their careers. Both love theatricality and melodrama, having been blessed with a severe case of extra-ness. Both love a lunatic costume — a chaotically poofy sleeve, an eerie monotone ensemble, a whimsical floral motif. Both explore trauma, grief, and PTSD in their art. Both regularly employ psychedelic visuals, playing with the border between reality and fantastical dream worlds. Both adore the grotesque. Both respect a ritual (Ariana does prayer circles on tour and loves to tempt the Upside Down with her font choices; Ari writes about old people jumping off of cliffs.) Both make art about panic attacks. Both love Sweden (Max Martin, who has produced many of Ariana’s songs, is from Sweden, so I assume she loves it.) Both have written extensively about people encouraging other people to break up with their girlfriends. Both love kooky sex shit.

If some A24 exec does not get on the horn this very day and ask Ariana if she would like to star as the pig woman in Ari Aster’s shot-for-shot, filmic remake of the “Eye of the Beholder” Twilight Zone episode, I will personally take it as a slight. If nothing else, at least let Ari and Ari go on a podcast together and then let me host it. thank u.