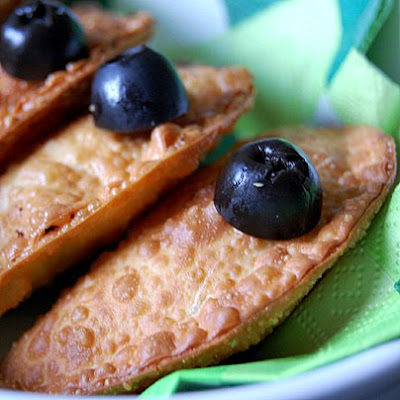 Jack Bauer has some kind of hipnotic power... I swear I wanted to post about Empanadillas during the weekend, but we managed to get the last 24 Hours season and we got nailed to the sofa! No time for cooking, nor talking, nor walking... we could only devour chapter after chapter. 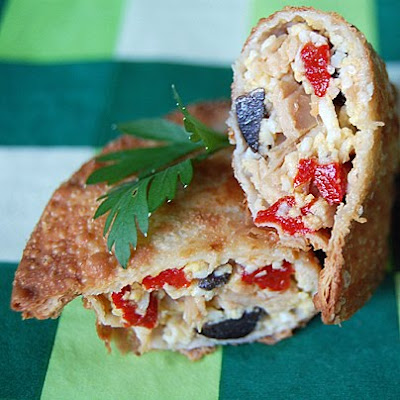 Anyways, somehow I managed to fry some empanadillas; it's tasty and quick, so here you have my recipe for the O Food Event: Olives' Empanadillas.
Just in case you didn't hear about it, find hereunder all you need to know. Still have some hours to send your recipes to Michelle from Bleeding Espresso.


September is Ovarian Cancer Awareness Month, and for the second year in a row, Sara of Ms Adventures in Italy and Michelle of Bleeding Espresso are hosting the O Foods Contest to raise awareness of this important health issue.


There are TWO WAYS to take part in the O Foods Contest:


1st: Signed copy of Dolce Italiano: Desserts from the Babbo Kitchen by Gina DePalma, Executive Pastry Chef of Babbo Ristorante in NYC, who is currently battling ovarian cancer, inspired this event, and will be choosing her favorite recipe for this prize;
2nd: Signed copy of Molto Italiano: 327 Simple Italian Recipes to Cook at Home by Mario Batali (winner chosen by Sara);
3rd: Signed copy of Vino Italiano: The Regional Italian Wines of Italy by Joseph Bastianich (winner chosen by Michelle).
OR
TWO: If you’re not into the recipe thing, simply post this entire text box in a post on your blog to help spread the word and send your post url to ofoods[at]gmail[dot]com by 11:59 pm (Italy time) on Monday, September 28, 2009.


One winner chosen at random will receive a Teal Toes tote bag filled with ovarian cancer awareness goodies that you can spread around amongst your friends and family.
———


From the Ovarian Cancer Research Fund:


Ovarian cancer is the leading cause of death from gynecologic cancers in the United States and is the fifth leading cause of cancer death among U.S. women; a woman’s lifetime risk of ovarian cancer is 1 in 67.
The symptoms of ovarian cancer are often vague and subtle, making it difficult to diagnose, but include bloating, pelvic and/or abdominal pain, difficulty eating or feeling full quickly; and urinary symptoms (urgency or frequency).
There is no effective screening test for ovarian cancer but there are tests which can detect ovarian cancer when patients are at high risk or have early symptoms.
In spite of this, patients are usually diagnosed in advanced stages and only 45% survive longer than five years. Only 19% of cases are caught before the cancer has spread beyond the ovary to the pelvic region.
When ovarian cancer is detected and treated early on, the five-year survival rate is greater than 92%.
And remember, you can also always donate to the Ovarian Cancer Research Fund at our page through FirstGiving!


Please help spread the word about ovarian cancer.
Together we can make enough noise to kill this silent killer. 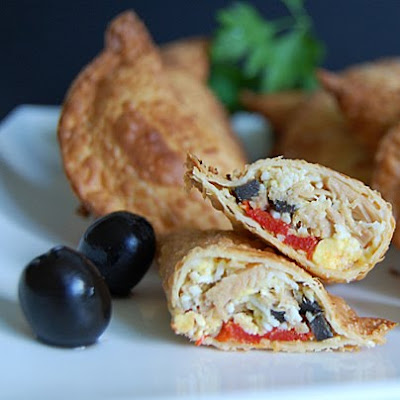 And to the recipe! Ingredients for a 20 Empanadillas batch: two packages of empanadillas dough (you can find these at the supermarket), 200 grs of Tuna fish preserved in Olive oil, 3 boiled eggs, about 15 to 18 black olives, five choped Pimientos del piquillo, 2 garlic cloves, olive oil and salt. 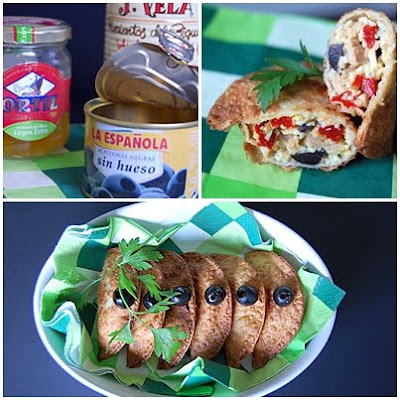 Feel free to add some fried tomatoe, green onion, spinachs, meat... up to you :D.
Start boiling the eggs. About 10 minutes is enough, then cool them in cold water, peel and grate. Reserve.Strain the olives and chop in small pieces, reserve some for decoration. Reserve.Take the piquillo peppers, strain and take the seeds away. Prepare a pan with some olive oil, heat and throw the choped garlics in. When golden, add the peppers cut in strips. Cook for 5 minutes at low heat. Discard the garlics and reserve the peppers.Take the tuna and cut into small pieces. Place inside a big bowl. Put the rest of ingredients in and mix. Reserve.Prepare the dough over a clean surface and put a bit of the mixture in each open empanadilla. Moisten the borders with a bit of water and bend making the borders coincide. Help yourself with a fork to seal it and reserve.Heat some olive oil in a deep pan. When the oil is hot (not burning) throw the empanadillas in until golden. You can also bake them in the oven if you want to avoid the frying.Put over chitchen paper and they will be ready to eat in 1 minute. Enjoy :DLast year, I won the O Foods Contest... this year it can be YOU!!!!
Check my post here.